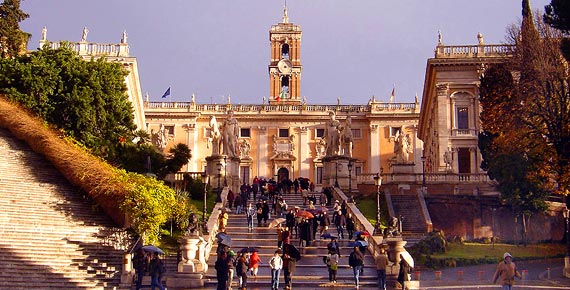 You can expect a lot from Rome, seat of empire. The city of the Caesars, of “La dolce vita”, of lively squares, of churches and museums. But also the city of traffic and noise. The city of Rome belongs to no particular historical period. Its quarters are a medley of ancient, renaissance and modern buildings.

Some places: Piazza Venezia is a junction of roads, is considered Rome’s hub, but also the focal point of the city. Centro Storico (Historical Centre), a warren of streets and alleys that made up the city from the Middle Ages to the last century.

The latter contains the Roman (Jewish) Ghetto, a captivating quarter that ends on one side with the Tiber, where the most ancient bridge in Rome, the Ponte Fabricius, leads to the little Tiberina Island.

On the other side of the Tiber there is Trastevere: in the 19th century it was a slum, today a charming area especially good for walking, restaurants and night entertainments. Dating back to the 3rd century, the church of Santa Maria in Trastevere, the oldest in the city. North of it the Vaticano, an independent State under Papal control.

Ancient Sites and Attractions to see: The Vatican: The grandeur of St Peter’s Basilica and the Vatican Museums.
The Forum and the Colosseum: Imagine the splendour of ancient glories at the Roman Forum, Palatine and Colosseum.
The Pantheon: The temple of all the gods.
Piazza Navona: One of the finest Baroque masterpiece in Rome.
Museo and Galleria Borghese: In Rome’s most famous park, a journey into the Renaissance artworks.
The Capitoline Hill: Rome’s symbolic centre. Today there are the two oldest public museums in the world, Palazzo Nuovo, with Greek and Roman sculptures, and Palazzo dei Conservatori, with art galleries, sculptures and frescoes.
Piazza di Spagna : The Spanish Steps are a popular meeting place for Romans and visitors alike.